Butterfly Books I Own

Web Links Not About Butterflies

Mother Nature entrusts caterpillars with the job of firmly attaching themselves to something bracing when they form a chrysalis. But sometimes this process goes wrong. When growing a lot of caterpillars in a small space, a second caterpillar may chew away the leaf or stem that another caterpillar had already attached to. Sometimes a chrysalis just becomes dislodged. Sometimes it forms in an inconvenient place — for example, without enough clearance for the emerged butterfly to drop its wings — and it has to be dislodged deliberately.

But, sometimes, all you have is a bare chrysalis, and you have to find a way to hang it yourself. That brings us to the subject of gluing.

We’ve had a lot of bare chrysalises, and a lot of trial and, sadly, error, as we experimented with gluing techniques. But finally Judi has hit on a technique that seems to be 100% successful, and in case you ever have a need for it, here it is:

There are three major keys to success when gluing chrysalises: The first is the glue, the second is what you glue it to, and the third is the actual technique.

The most important thing about the glue is to find one that won’t penetrate the chrysalis and interfere with, or even poison, the life inside. Super glue does not work. Neither does Elmers. They will damage the butterfly. Judi has discovered contact cement, which we get at our local auto parts store, works very well. I’m sure your local auto parts store carries it, too:

I don’t think the actual brand is important. Just go to your auto parts store and ask for contact cement.

What to glue the chrysalis to

Judi spent a lot of time trying to glue chrysalises back onto natural materials — bits of stems or leaves, for example — but in the end discovered that the best material is…

…are you ready for this?

Being cut into short lengths here.

Shoelace is cheap, flexible (to adapt to the shapes of different kinds of chrysalises), easy to pin through (to hang the chyrsalis when done), and the contact cement adheres to it well.

Step 1: Get everything together — chrysalises, cut lengths of shoestring, and cement (not pictured): 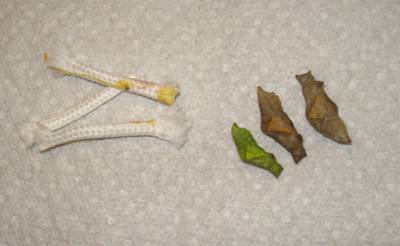 Step 2: Presumably you’re familiar with the type of chrysalis you have to glue and how it’s attached to its support in nature. You want to mimic that as much as possible with the shoestring. Here we have three Gold Rim Swallowtail chrysalises, and we know that a Swallowtail attach its chrysalis at the bottom, and has a couple of short threads that attach about three quarters of the way up and allow the chrysalis to lean out. So put a dab of glue at the bottom of the shoelace: 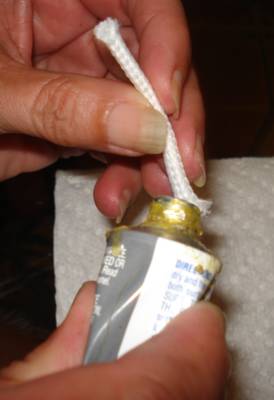 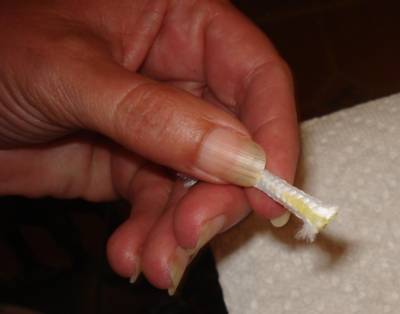 Gently press the base of the Swallowtail chrysalis into the cement and hold it for a moment for it to “take.” (Obviously if this is another type of chrysalis you might be gluing at a different point.)

Set aside to give it chance to dry (obviously the chrysalis in this picture is different from the one in the previous, but these were the clearest photographs of each step): 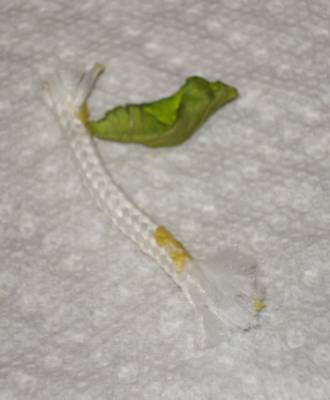 If you have more than one to glue, you can proceed to the others while you’re waiting: 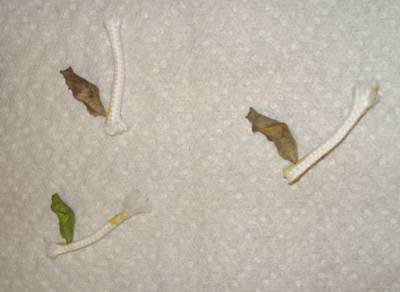 Gently press the chrysalis against the glue, so it adheres (again, these are two different chrysalises in these pictures)… 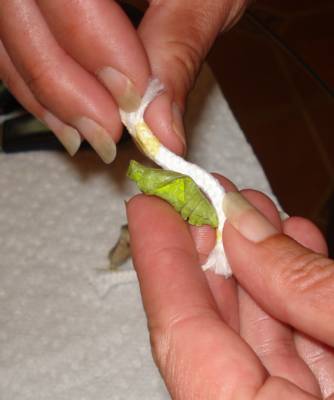 …then (before the glue completely dries), gently pull it a little back, so a strand of glue allows the chrysalis to hang away from the shoelace, just as a naturally attached chrysalis would: 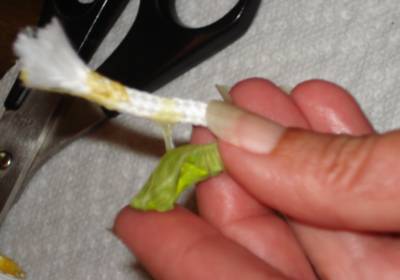 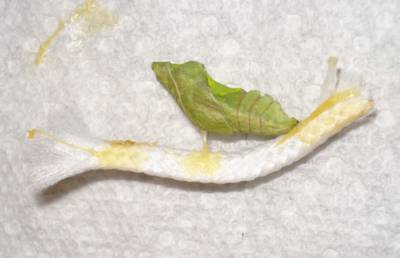 Step 5: Suspend the shoelace using your favorite method and materials, making sure (as goes without saying) that the butterfly will have clearance to drop its wings after it emerges: 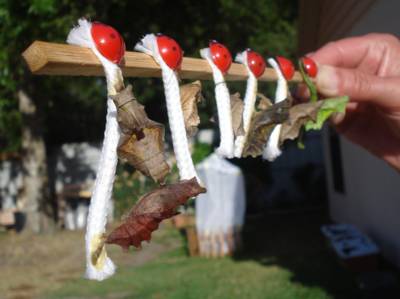 And yes, the first shoelace in this picture has two chrysalises: The second caterpillar attached his chrysalis to the bottom of the first caterpillar’s, and then they both fell. Judi glued them as they had attached themselves, to avoid handling them any more than necessary.

You can see from this picture that this technique works for Monarchs, too, and that they do indeed emerge successfully: 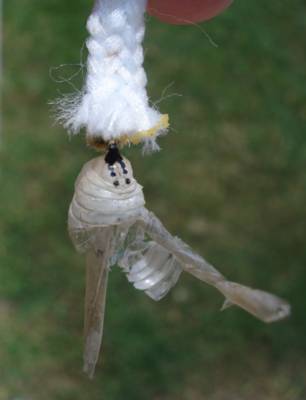 The only trick is to glue them so they hang the same way they would if they were attached naturally.

Commenting is closed for this article.